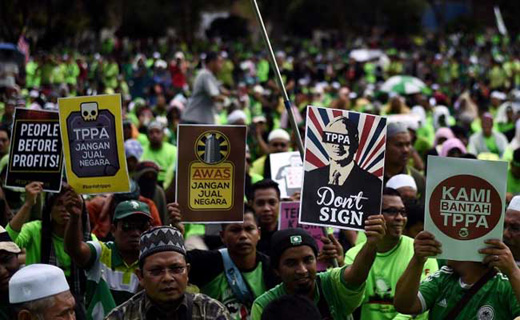 The Trans-Pacific Partnership has become a bone of contention in the U.S. presidential election. Donald Trump has incorporated it into his xenophobic, foreigner-bashing discourse. He presents the deal as a conspiracy of evil foreign nations, abetted by weak U.S. leaders, to undermine U.S. sovereignty and give “American” jobs away to foreigners. Democratic candidate Hillary Clinton said she opposes the TPP, but she has not emphasized supposed benefits to foreigners as a reason. However, President Obama is pushing for Congress to approve the deal.

What most people in this country, misinformed by Trump and the corporate-controlled mass media, may not realize is that the TPP has met with strong opposition from workers, small farmers, environmentalists, and others in most of the countries whose governments have signed on to it. These objections have been the theme of mass demonstrations against the TPP, which opponents fear will do to their countries what NAFTA did to Mexico and CAFTA-DR did to Central American countries.

These so-called “free” trade agreements have had a disproportionately negative impact on the poorest countries enmeshed in them. They have undermined national sovereignty and turned countries that were self-sufficient for food production, like Mexico, into net importers dependent on transnational agribusiness corporations to feed their people. They’ve damaged the environment and contributed to and even more out-migration of people who find themselves unable to support themselves and their families.

The TPP promises to be more of the same, but on a much larger scale. This is why so many unions, political organizations (mostly left but also some more centrist ones), farmers’ organizations, and others are pushing their national legislatures to vote against final approval of the pact. All the original TPP countries have now signed the deal, but in most countries, the national legislatures have yet to vote the thing up or down. These votes, however, are coming very soon.

When the TPP was first broached a few years ago, opposition began to register, but mostly on the left side of the political spectrum. Since its signing in Auckland, New Zealand on February 4 though, criticisms and protests have grown more intense. Countries that signed on, besides the United States, include Australia, Brunei, Canada, Chile, Japan, Malaysia, Mexico, New Zealand, Peru, Singapore, and Vietnam. From February 2016, countries have two years to fully ratify the pact. In at least some of these countries, ratification is not a foregone conclusion.

In Peru, the left and labor unions have been joined by peasant, indigenous, environmental, and other people’s organizations in militantly opposing the TPP. Verónika Mendoza, who was the left’s candidate in recentpresidential elections said the TPP “is a treaty which wounds our sovereignty [and] will allow the Peruvian state to be placed on the bench of the accused by transnational enterprises if they think that our rules put at risk their future profits.” She spoke specifically of the price hike danger for cancer medications. She was joined by sociologist and former Christian Democratic legislative candidate Manuel Benza, who said the pact’s protections for patent holders would “not only would it make access to medicines impossible for the majority,” but also have a similar impact “on medical procedures, diagnostics, surgery, and treatment”.

In Chile, the TPP is causing splits in the ruling eight-party “New Majority” alliance of President Michelle Bachelet, who hails from the Socialist Party. Her predecessor, Sabastián Piñera of the right-wing National Renewal Party, signed on to the TPP in its earlier stages. After Bachelet was elected in 2013, she decided not to pull out of the deal. This created friction with her Communist Party partners in the New Majority, as well as with labor, indigenous organizations, and other sectors of the public.

Camila Vallejo, a well known Communist deputy in the lower house of the Chilean parliament, has played a major role in opposition to the TPP. The day before the deal was signed, she stated, “I’m not prepared to contribute to the mortgaging of the sovereignty of our country.” She said it was essential that citizens mobilize to force parliament to reject the pact.

Public sector unions in Chile are also rejecting the deal. The National Coordinating Committee of Chilean unions affiliated with the PSI, Public Services International, points out that the government negotiated the TPP “behind the backs of the citizens, the indigenous people, and the parliament.” The unions argue that under such treaties production becomes concentrated in global value chains controlled by the largest transnational corporations. Such corporate power results in a push for deregulation, financial liberalization, even more investor protection laws, outsourcing, subcontracting, and privatization. The unions also highlight the undemocratic nature of the Investor-State Dispute System (ISDS) built into the TPP which gives corporations the right to sue governments for actions or laws that threaten profitability.

In Mexico, Australia, Canada, and Japan, left-wing (and even centrist) political leaders and parties, labor unions, parliamentarians, environmentalists, farmers’ and indigenous people’s organizations, and others have denounced the TPP in similar terms. Those countries that have had bad experiences with past “free” trade agreements urge others to learn from their example.

Juan Romero Tenorio, a member of congress from Mexico’s MORENA (National Renewal Movement) party, warns that “the TPP goes against [our] national economy” and says the speculative investment it will produce could harm Mexican businesses. The Communist Party of Mexico denounced the TPP’s required labor law reforms, which it predicted will bring layoffs, budget cuts, and the “intensification of exploitation” in sectors like auto, dairy, textiles, oil, and steel.

The TPP was negotiated in secret, with a privileged role for corporations and the exclusion of labor and other citizens’ organizations, and even of elected representatives. Its secret ISDS mechanism violates national sovereignty allowing multinational corporations to override laws for the sake of future profits. Its patent protection clauses make it more difficult for governments to protect the health, safety, and well-being of their citizens. Those same clauses also endanger small-scale famers who will not be able to use the seeds that they produce, but instead be forced to rely on agribusiness giants like Monsanto.

These are exactly the same points that are raised against the TPP by labor, environmentalists, and consumer rights activists in the United States and other wealthy countries. They are also the same sort of critiques that are raised worldwide against other giant “free” trade mechanisms, including the Transatlantic Trade and Investment Partnership (TTIP), which would link the United States and the European Union, and the Trade in Services Agreement. All together, these pacts would lock in multinational corporations’ control over more than 80 percent of world trade.

But the labor, left, and other opponents of the TPP in the poorer countries also fear that the agreement would concentrate even more political power in the hands of the United States and other wealthy capitalist states, such as Canada, whose mining industry is wreaking havoc on the environment and indigenous communities in Latin America.

They also perceive that this huge corporate power grab would be a severe obstacle to any country that wanted to move in a socialist direction. Specifically, they see the TPP as undermining their own efforts to create alternative economic arrangements which do not force the poorer countries to accept neoliberal “free” trade, privatization, austerity, deregulation, and repression.

An injury to all

This is a very different TPP story than the one Donald Trump tells. It is the version, however, that workers and progressive people in the United States should listen to. Treaties like the TPP harm not only workers in developing countries, but also workers in the United States. They increase world inequality, weakening unions and other people’s organizations elsewhere, and thus make it easier for multinational corporations to do what they please in their insatiable search for more profits: outsource production to keep labor costs down, destroy the environment by means of dirty and unsustainable production technology, endanger world health by destroying poorer countries’ efforts to build up their public health systems, and much more.

For workers and other regular folks, this is not a zero sum game. What hurts workers in Mexico, Peru, or Japan also hurts workers here.

Cross-border, international solidarity among workers – not competition – is the way forward. All should oppose the TPP, but they should also reject Donald Trump’s use of the TPP to promote hostility between U.S. workers and those in (or from) other countries.